Oh, and I also:  Went to Verizon to check on my bill; upgraded my phone (long overdue!) checked the mail and phoned in and picked up a prescription and balanced my checkbook.

All in all, a productive day!

A day off and I am spending it getting ready for a drop-in on Saturday, as well as doing many tasks on my to-do list:

Saturday I unwrapped my new Kindle (the next-generation Kindle! With 50% better contrast and room for 3,500 books!)

Sunday I started buying and reading books. For $15.96 I have already acquired:

Most of the classics are priced so cheaply (the collections were 99 cents and $1.99.) They’re pricing them to move.

I’ve already finished one book. I love, love, love my Kindle. Sure, your fancy-schmancy iPads can do everything but butter your toast, but for dedicated reading, the Kindle is ahead of everyone else. (And enough battery life on one charge to last a month! Wow.)

Okay, it came a day late, but it came! We have snow for the day after Christmas. If we were in England we’d call this Boxing Day. Behold the power of the Internet – I can add a link and you can find out what Boxing Day is.

Now I have the urge to sing Good King Wencelas.

Here’s an excerpt from this post on peace – after all, we are celebrating the birth of the Prince of Peace this season:

“While discussing the nature and meaning of “peace” with my family, my sister-in-law (a former human resources specialist, very wise, and an excellent reader of people), drops this insight: “Aggression is in our nature: all people have a well of aggression that exhibits itself in different ways”.

Those that recognize it within themselves can learn to channel it in constructive ways, such as sports, martial arts, or business pursuits. Others expend it in destructive ways, such as gossip, politicking, undermining of others or open violence. The people who are most dangerous and the most vicious, to me, are those that don’t recognize it in themselves, because then the aggression is left to exhibit itself in uncontrolled manners.”

The Nativity as seen through Gmail, Facebook, Yelp and more ….

Our state has grown enough to get a new Congressional seat, per the latest census.

Dec. 20 and I just put the tree up! Each year it varies. This year I’ve spent December alternately being sick or baking 20 dozen cookies. (Note to all friends and family: I only baked when I was healthy. Promise!)

Tonight I put up the tree I “inherited” from Dad when they downsized to a patio home. Here’s the story I wrote about that tree 17 years ago for The Georgia Guardian newspaper. Tomorrow or Thursday I’ll post pictures of the decorated 2010 tree. Tonight you’ll have to make do with a picture of Pickles sitting underneath the tree: 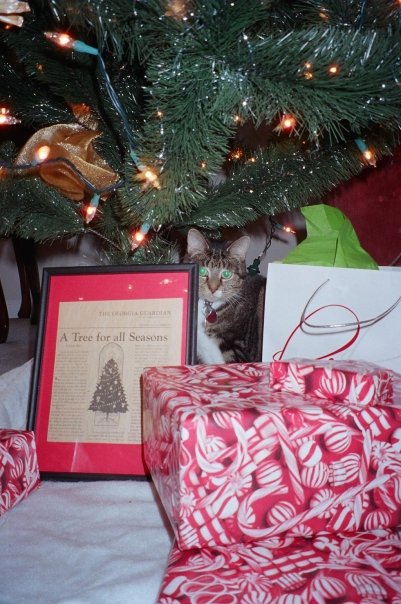 Pickles poses by a copy of the original story of our family tree. Dad loved the story so much he matted and framed it. Once you read it, you’ll see why.

A Tree for All Seasons

Every family has its Yuletide traditions, and ours is no exception. We’ll be going to parties, attending the Christmas Eve candlelight service at church and decorating the tree. Yet we do something lots of people would never dream of: We pull our tree out of the attic each year.

Yes, we have an artificial tree. During my impossible-to live-with teenage years, I continually referred to it as the fake tree. I would groan and roll my eyes each time my dad pulled it out of its box, telling the story of how he bought it in 1968 for only $15. (What a bargain, I can hear him say.)

When I was in high school I would beg my parents to buy a real tree. We could decorate it with strings of popcorn and other “natural” ornaments. But each year we’d re-assemble that same old tree, sticking branches into the holes on the trunk pole and bending them into place so they’d look right.

As time passed, my brother and I graduated, left the house, got jobs. Now, I have only a few days at home to celebrate the holiday. And I’ve noticed a change in the way I feel about that tree. It happened the year before last, when my dad said, “I think we might replace this one with a new tree.”

You would have thought he suggested we replace Mom. I gasped, “No! You can’t get rid of this tree!” Even as I said it I realized why.

Because of all the laughs we have putting it up each year … because all the made-in-kindergarten ornaments look just right on it … because we’ve had it for 25 years, and how many things last that long? Heck, that tree is the same age as my brother Bill and we’re keeping him.

That artificial, fake but eternal tree has become so much more than a decorative centerpiece upon which to hang the ornaments. It is a symbol of all those Christmases past and all the memories we share. That glorious fake fir has become a holiday tradition of its won. I wouldn’t trade it for the most majestic blue spruce around.

One of my friends brought by a huge container of chicken noodle soup. I’ve been noshing off it for three days. Wonderful friend, wonderful soup!

*Title of the post from the Lewis Carroll poem.